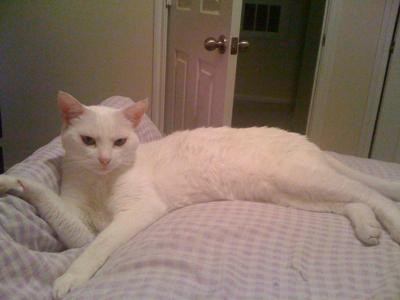 I went to the pound one day to adopt a beautiful white cat I had seen online. As I wrote in Merlin's story, when I arrived, I found this small no-kill shelter trying desperately to save animals they had just found out about and begged me to take Sophie and two solid white baby brothers at a discount. I couldn't say no. I took home Sophie, Merlin and his brother, who went to live with my daughter and is now known as Yuki.
Unfortunately, Sophie is too timid with other cats and they know it, so they pick on her all the time. We built her a beautiful area in my office so she had a choice of window seats and her own safe territory. But she became sick, and we almost lost her. After many rounds of meds and vet visits, she began to get better. My daughter would take her out and let her walk around in the back yard while she followed her, making sure she didn't go over the fence and get hit by a car. She really improved then. So we knew she didn't like her beautiful prison, and we couldn't let the other cats keep terrorizing her. My daughter took her to live with her and her new husband, and she was happy. However, an old kitty that grew up with my daughter was pining for her, and she ended up taking her home too. Now Sophie has banished herself to the garage and we are working hard to find a home with no other kitties. She is fine with dogs and kids. She is a diva and a very gentle soul. Above is a picture of her with a friend that tried to adopt her, but later learned that her apartments would not allow it.