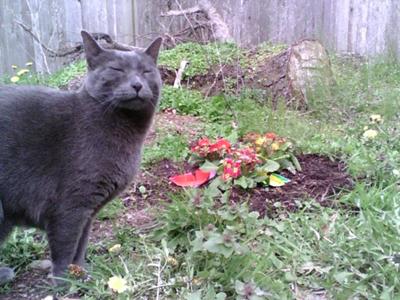 well i already posted a little about my kittin that i just got..but here's a different cat story of mine! im full of them!

so i had adopted a kitten about a year before i found gary, his name was oly. he was just the cuties kitten ever..i had never had (picking on my own) got a cat that wasn't an orange tabby..lol always calling him tony of course! anyway, oly was perfect! one of the best kittens ever really the most talkative ever! only very sadly he ended up a few months after adopting him coming down with f.i.p. i cried and cried and just could not get over him and even growing up the reason i always named a cat tony one after the next was i always believed that my cat would come back! so anyway super long story short, when i had ended up moving from one place in monroe to another..to a barn..well an apartment(mother-in-law) above a barn, i was taking care of the animals and feeding stray cats. one day i came to do my regular feeding to the barn and all of a sudden a gray cat just like my oly came running out of no where..he was running at first and then realized i was the feeder(lol) he ran for a sec and then i called him..lil cat call..he plopped down to the ground and meowed at me! it was so weird cuz my cat oly just did the same thing when he was being playful. don't get me wrong he didn't keep me right away but a little coaxing(ie wet food) and lots of love and persistence he adopted me! :)the craziest part is that when i had took him to the shelter that i had at that time volunteered at and the same place that had been thorough my loss of oly, the dr came back into the room with him and had chills all over her body, she said to me..."it's just too ironic, he is the same age that oly would have been" we seriously both cried..i knew in my heart i found him again! he's ps..the best mouser ever and so loving and dedicated to me! he's all the cats i have ever had all piled into one!
his name gary: he is named after gary the snail from sponge bob square pants..he meows a lot..always talkin!