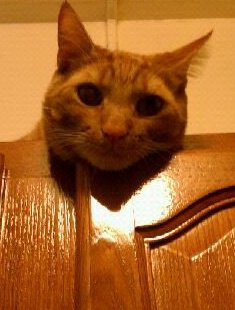 My name is Stella i am 24yrs old and i love and adore animals, my whole life i have dedicated my time to them. Since very small i had animals all around me. Back in my home town Albania when i was about 6 yrs old i had a cat named Tikkie and was an organge tabby. At the age of 11 i moved to Italy for good and left my cat behind with my grandmother.. a week later i had moved to Italy i get a phone call from my grandmother saying that she found Tikkie in the balcony dead, Tikkie somehow knew that i had left and that i was not going to come back for a while.. My grandmother told me that he was mewing around the house and he only wanted to relax on my bed as if my smell gave him great comfort. Now over 13 years later my husband surprised me with a kitten orange tabby which i named Tikkie. Each time i pet Tikkie i think of my hometown Tikkie and how much i loved him. i remember well crying for Tikkie when i left my hometown and my mom asking me "Stellina why are you crying? we will come back some day again" and in my mind i thought that i would not find Tikkie when i return. Tikkie was truly amazing for me... he would follow me around everywhere, inside outside and few times at my school (few blocs away from my house and cats back home would stay outside and inside) my parents would yell at me for bringing tikkie in and i would sneak him in my room but my mom would tell from his orange hair and back then i didnt realize that my mom knew tikkie had been inside as proof of his hair. I remember we would sneak together and i would feed him whatever i could.. (i used to think that bread was the most important think to feed someone so i would give him bread a lot with meats and treats) i sure miss my tikkie and luckily i have another tikkie now whom i spoil alot, have taught him few tricks such as hide and seek game, no cameras please, and the catch me if you can game.. also when we have company tikkie starts to grab me for not paying to much attention to him. I feel like the home town Tikkie came back to me and i have an amazing life having them in my life..