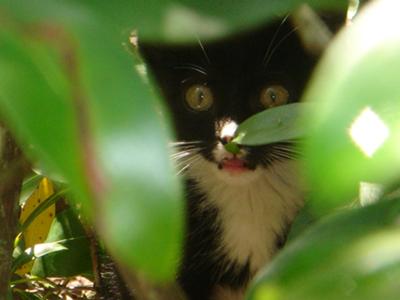 I found Steve, as a kitten, after he was abandoned by his mother and left alone to live under a trailer at our vacation mobile home park. He was timid at first, by by the end of the second day, we became great friends. I always considered myself a "dog person," until I met Steve and gazed into his beautiful green eyes. Now, he is a part of our family where he lives happily alongside our two small dogs. I named him Steve Martin, because of his "tuxedo" and he was so playful that I called him "a wild and crazy guy!" Pictured is Stevie the first time I saw him....true love at first sight!