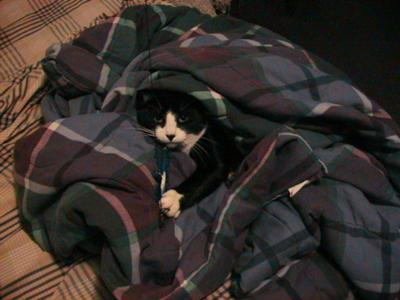 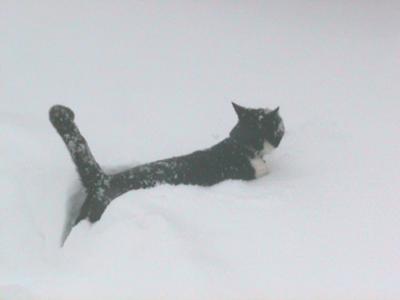 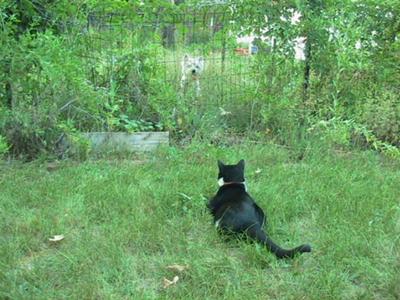 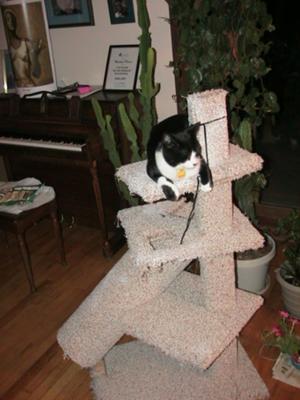 He was the James Dean of the cat world.

Lived fast died young. I came upon Jack by accident whilst living in the USA. He was my roommates cat, given to her as a kitten because her friends.......and I kid you not, thought "she needed a man in her life".
How senseless can you get to give someone a pet as a gift, and one that you don't even know if they like animals! And,well she didn't.

I guess it was fate. I certainly wasn't looking for a cat, but the thought of what might happen to this feisty, stunningly attractive little monkey at the pound forced me to seize the moment.

Supossedly he came from a farm, but being a kitten you wouldn't assume he'd picked up any wild habits, but Jack was no ordinary cat.

He grew big & strong, quite a muscular cat, with absolute perfect symmetrical markings, perfectly black nose and a wild look in his eyes.

After he started attacking the neighbours cat I realised it was time to get him neuteured, though I felt terribly guilty doing it. But I looked after him like he was my son.

The whole "outdoors/indoors" cat thing in Colorado, is very strange to an outsider. In the UK we just have "cats". The majority of which are outdoors, unless they're in a highrise apartment which is rare. The thought of this proud specimen of nature being stuck in doors and declawed to suit someone's furniture bared not thinking about.

Jack was unique in many ways. I've had cats in the past but none like him. He would literally jump 3ft in the air, and door backflips to catch the fishing rod toy, play in the snow (when others would shudder at the cold), and often greet me as we both came back in the wee hours as if to say, "alright, how was your night."

Sometimes he'd be gone for a day or two. He seemed to hate being inside.

Most of the time, he freaked my girlfriend out by climbing onto the bed, and coming right up onto your chest with his face in yours, giving you a good old lick. On other occasions he had a funny turn, and would swipe you as you walked passed, but that was rare.

He enjoyed games, so I built him a cat city with multiple levels, tubes etc.

The funniest thing I can remember was him sitting outside having a standoff through the fence with next doors scottish terrier.

Sadly, I had to leave the states, but luckily passed him onto a good friend who promised not to rip his claws out!

Even sadder, only 6 months later he was run over. I know it was deliberate, because Jack was street wise. Previously i'd lived in quite busy roads, and often found him several streets away. He never would have got caught sleeping under a car. This was now a cul-de-sac making it even easier for him to escape, and I suspect someone ran him over deliberately.

WHy do I say that? Because one of my close friends often boasted about his dogs tearing cats apart, and I suspect he wasn't the only one.

ANyways, I made sure he had a free and wild life whilst he was here.