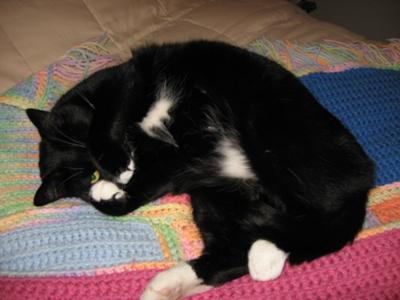 It was Christmas Eve in Las Vegas Nevada about 10 years ago, and my wife, Karen, was walking along a sidewalk in our neighborhood, looking at the lights. She heard a cat meowing nearby. She turned around and saw a roughly six month old tuxedo cat walking behind her. We already had two fixed male tabby cats, Frankie and Sammy, but this one was heading right toward Karen, using her "tuxedo pretty kitty" wiles. Karen called me on her cell phone: "I got a little kitty," which after some examination we found out was female. Of course we called her Noel.

So, we wound up with another kitty cat and a trip to the vet to get her fixed. We still have Noel, as well as Frankie and Sammy, and they all love us, though we can tell that Noel thinks she's the prettiest of course.