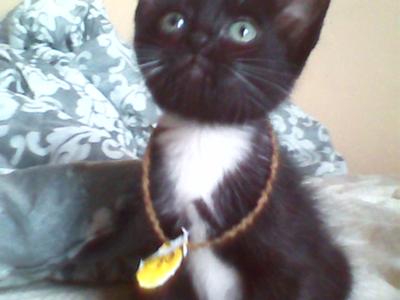 Bingo wearing the made up collar. 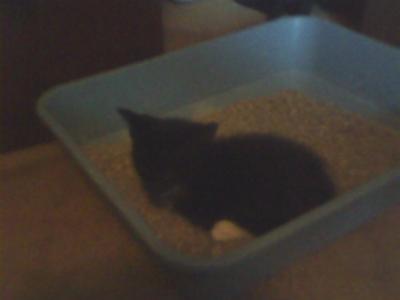 Bingo lying in the littler box. Same as Taylor when he was a kitten. 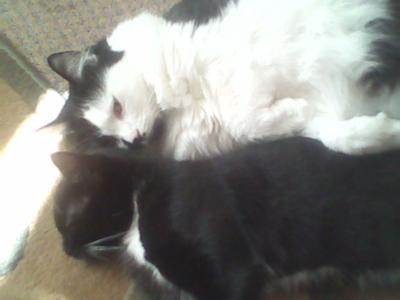 Nella and Bingo cuddling for the first time. 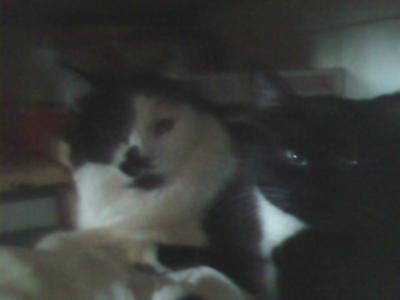 Hi! My kitten is the 3rd cat I got. Her and her big sister Nella are great cats. Bingo the Tuxedo even has a brother to! Taylor was his name. I got him in 2009 and then after maybe 2 months he ran away in 2009. December 10th 2009 is when he left to explore the world. He was always running around outside making friends. Nella met him a couple days before he ran away. She liked him but Taylor didn't like her back I think. Soon once Nella was 2/3 years old Bingo was born. Both of her parents or at least who we suspect the father is are black cats. Her father was very muscular towards the others. The mother a pretty black cat who has a mind of her own. I heard that one of them had a white triangle on it's chest. Due to the fact that Taylor had a Y on the back of his head, And Nella with a heart on her cheek and hearts crashing together on her back and tail. I thought I would adopt that one. But instead Bingo stole my heart. There was a lady who wanted that one to but she couldn't get it. I didn't understand why or I didn't listen because she just kept mumbling. Taylor and Bingo are both short hairs while Nella is a long hair. Once Nella saw Bingo for the first time she accepted it really quick! Bingo on the other hand had to take a while. They play fight daily steal each other's toys but hey they like what they do! Nella rather tan in the sun or bath herself other then playing. Bingo likes to play hunt,play fight and watch ever single thing that moves outside the window. Yes after Taylor left I no longer trusted Bingo or Nella to be left to play outside. So now Bingo gets to play outside if she has a leash on that i'm holding. But that's only because she is following in Taylor's paw steps. Then after she went in heat for the first time we got news that her mother was pregent again! But this time it was a different father. All kittens were brownish. We totally knew who the father was this time. It's been months now. Bingo stopped growing after a month but started back again. I expect to make another generation of cats but Bingo's way to young so that's going to have to wait! Taylor and Nella both were fixed but Taylor went in heat anyway. And if Bingo was ready to have kittens then who would be the father?! Oh well looks like this may take years in till kittens will be ready. Oh and Taylor was all white had a black tail then a black Y on the back of his head. Nella is also black and white but you'll see those 2 in the pictures.