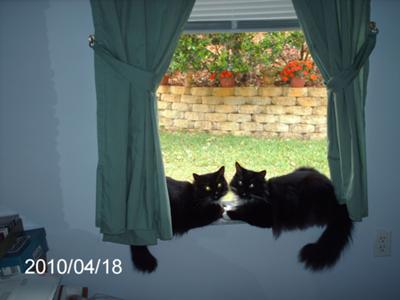 They seem to be discussing something? 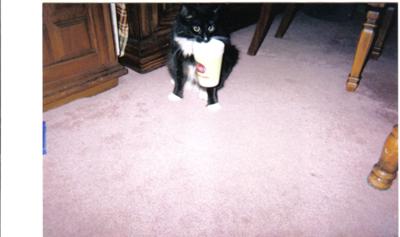 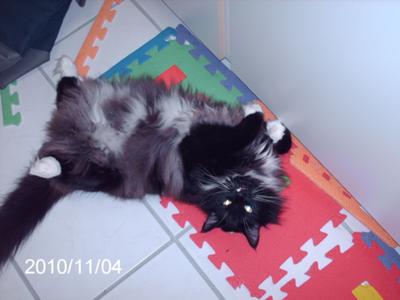 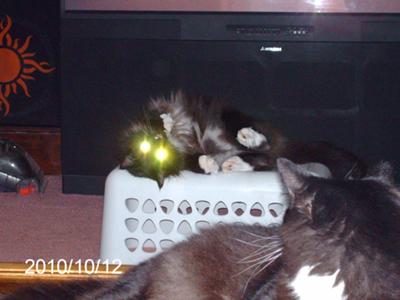 During the week before the 2004 Hurricanes in FL (August 13th), I worked at a Temp. job & one of the guys taking a smoking break heard a meow, and brought in a fur ball of a black & white kitten. He said he saw the mommy cat moving them, and he found another, of which I took both, because they each had a spot on their nose(s), 1 had 1 spot, the other had 2 spots. (Mini) Cooper has the 1 spot, Freddy (double trouble) has the 2 spots! They are both now over 13 lbs. each. Freddy is the SOFTEST (like bunny rabbit fur-SOFT), and Cooper has longer fur, both so different, yet brothers of the same litter, and I adore them! If they hear me raise my voice, they come running and Meow loudly at me, until I calm down to a normal tone!

It was after the Vet, neutered them and declawed their front paws, that he mentioned they were "Money Cats", as they are worth money as their fur is most like human hair, in that people are not allergic to these particular cats! Knowing we were having our 1st grandchild, I didn't want a risk of the baby being scratched, as Freddy got his name for "Freddy Kruger", due to his climbing up my legs as if I was a tree, and he had sharp claws & knew how to use them! He had me bleeding from chewing through a baby bottle (he bit the nipple off, and as I tried to retrieve it from his mouth he bit me repeatedly), kitty formula all over the place! He was ravenous, and finally I figured out they could eat soft food, if not dry kitten food, as well as drink from a bowl. Freddy is the double licker, and Cooper takes his time.

Note from Webmaster: Click on each thumbnail to enlarge picture.