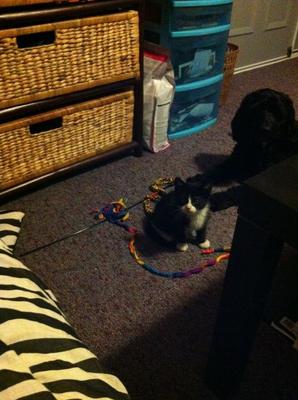 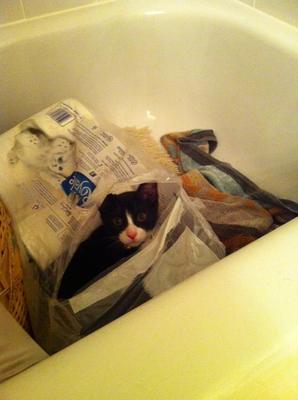 I was dealing with the loss of my cat that had to be put to sleep after dealing with some sort of rare skin disease that couldn't be fixed in any kind of way along with daily vomiting at least two times a day. My beloved Nova was only 11yrs old when she passed away. It broke my heart. So, one day my boyfriend drove me to a pet store to cheer me up. That store had SO many cats. My eyes lade apon this tiny black and white tuxedo kitten. I than had this rush of feeling of I had to have him dispite of what my parents said even though I'm 22. Their house, their rules. Anyways, I asked if I could play with him for abit and I did, I fell in love with him even more so. I told my Mother about what happend and lets just say it took abit of convincing. Than two days later, I was looking on an ad site and I saw the tuxedo kitten from the store! I flipped out and showed my mom. My mom saw the ad and she fell inlove with him, because he had blue eyes at the time. My mom somehow convinced my father if we could go see the kitten that night. We drove up to the store, at first my dad wasn't really into him so he wanted to see the other cat who was his sister. His sister looked crazy as blunt as that may sound. My dad saw it too and said we will take the cat that I found! My dad said hes going to be my cat, and my responsiblity. I agreed of course. Flick is my little furbaby who I thank God for everyday. I truly believe that what happend to Nova had to happen in order for me to find Flick, Who knows what kind of home Flick would of ended up in if I didn't adopt him. His name was Mittens. It took me and my parents a good day or two to come up with a name. I'm the one that blurred it out over dinner LOL. I love Flick more than I can express. Him and my two yr old cockapoo dog are bestfriends who get along SO well. My little five month yr old Flick is SUCH a handful whos a chatty little lad but thats okay. I don't mind abit. :)