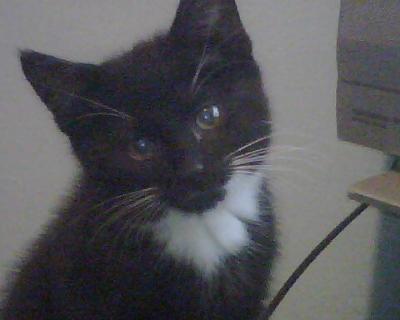 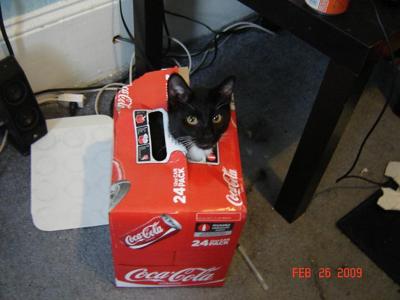 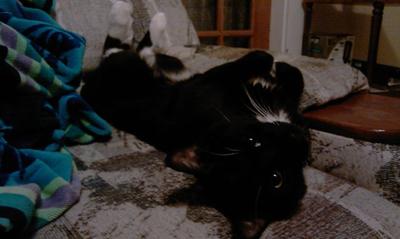 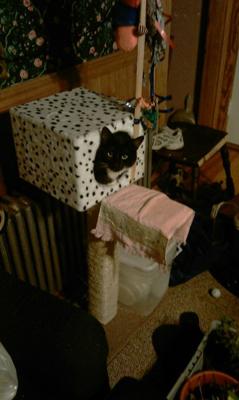 Him in his birdhouse

My roommate brought him in while we were living in our small apartment and he's been with me since. He's very cute and makes a really round face when he's cold. He's extremely smart and he was born around September 2008 (about 2+ years old now.) He was born as a mute and could not meow at all while he was in his kitten years. It was very difficult to find him especially when he was locked in my roommate's room or the bathroom sometimes. About a year later, I guess his vocals improved and he can slightly make a non violent hissing sound or a modified mating call to get the attention of someone, but still not anything close to a cat's meow.

His inability to 'meow' is the main reason why he goes by "Kitty-Meow" because we always went "kitttyyy Meow?" He loves anything chicken or chicken flavor beyond belief and will dig through the entire trash barrel if there is one small chicken bone at the bottom of the bag.. He's an extremely curious cat and likes to knock over his water bowl like any other cat. He will play in the tub after someone showers. =/ And then go to sleep on his back with his paws up.

We moved pretty much down the street a few months back and he found a way to run outside on my grandparents. He was missing for 4 days and we looked everywhere and every street for him. He comes back on the 4th night so skinny and now he's back up to weight and is happy to be back with me. So amazing how he survived in these busy street areas though he might have been hiding somewhere the whole time since he's very frightful/cautious of things he's never seen before.

Right now, he's afraid of other animals and toddlers. Lol I really don't know why, but I guess he takes a while to adjust to change like I do. My girlfriend said that he acts like a human sometimes and makes the same facial reactions and expressions like I do. Like owner, like cat? He is the perfect cat for me and the personality and appearance just matches me.

I'm sad to say that I may have to give him away if I end up taking a plane to California this spring and I really hope the person who I give him up to will take care of him with love and care as much as I have. = A lot of hugs, kisses, toys, and chicken as his favorite treats. =