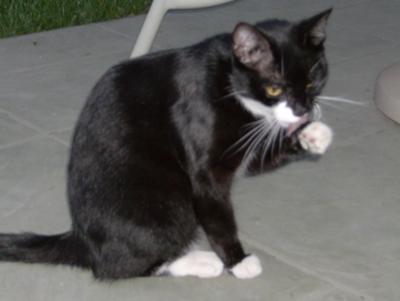 KENNY THE RULER OF THE HOME

Kenny will be 4 yrs old on Halloween, believe it or not. I got my black and white child, Kenny (and his brother, Kalvin, a gray tabby stripe monster) barely a week after a devastating loss of my son who was 14 and had cancer. Somehow this annoying lady on the phone through petfinders talked me into driving an hour out of my way to a Petco near LAX when I had a local Petco close to me where I lived. I've had black and white cats my entire life and I knew I wanted a replacement twin for the 14 year old boy I lost (the gray stripe tabby) but also my new best friend, smart and too damn loud (he's always talking and has a fit everytime I'm on the computer), a black and white kitten.

...And there he was, all 3 1/2 months of him sitting in the metal deal with his brothers and sisters. I never experienced an animal who immediately locked eyes with me and remained fixated.....even when he wasn't the first pup I picked up to hold (I know, bad me...but Kalvin, who looked my recently departed, was a baby twin). Kenny basically was telling me, "ok, so this is a done deal, you're takin' us home and that's the end of the story, any questions?" Of course, the cat ladies at the far away Petco had to process my app, fee, multiple interrogations.....and then I had to leave and a week later these 2 little troublemakers moved into the Hollywood Hills. It was definitely a far cry from their "roots" which was a back alley in Eagle Rock, behind a furniture store, litter found under a blue tarp on an old used desk strewn out into the alley. This little Kenny is now the owner and keeper of this castle and he reminds all of us everyday. He's scary smart and he expects you to know the tone of his meows and you'd better hurry.......he's the best pal and I can't imagine life without the Kenny. And to think after I hung up with the initial phone call to the annoying cat lady foster mother who brow beat me into submission by going an hour away to a Petco I've never been to nor would....I almost hung up and decided I just won't show up and I'll visit my local store....I was so close and to this day as confused as I was to drive all that way in my time of grief to deal with an overbearing cat lady who swore she knew more about cats than me, etc. etc.......but for some reason I went on automatic pilot and just agreed to go and I don't remember anything else until that little black and white trickster locked eyes with his new Dad and signed the deal before I had a chance to even put my jacket down. So I thought that was an amusing and interesting story but obviously it was fate that I went to this off the beat place and there he was......it's pretty clear this kitty controls all my thoughts and actions, even before we met!