He must have seen me coming 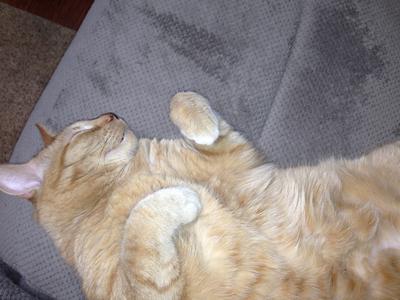 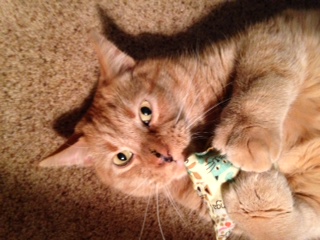 My 10 year old orange tabby male, Harvey, aka Handsome Devil, adopted me at the shelter where I volunteer. Back in November 2010, I lost my 18 year old cat and started to volunteer at a local shelter. One day while dropping off some donated supplies, I met an orange cat sleeping on the office desk. He woke up, stretched, then put his front paws on my left shoulder and asked me to pick him up. So I did. He circled in my arms and curled up and closed his eyes. All I could say was, "well, nice to meet you too." I had my eye on another cat I was thinking about. I gently placed him down with a few strokes and words and went on my way. A few days later, I was back on a visit (the shelter was new, so many of us were bringing in much needed supplies every day). The same orange cat was on the desk in the office and upon me entering, sat right up and looked at me as if to say, well, so you are back again! I went over and said something like, "oh, you're still here." He again insisted on me scooping him up and curled right up in my arms. Another volunteer happened to be there and remarked, "wow, he must really like you. He hasn't done that with anyone else." The volunteer went on to say that another woman had first dibs on this guy till Saturday at 3 pm. That was a few days away. It also happened to be my birthday. Saturday came and I walked into the shelter about 3:03 to find that the orange tabby was still there and the lady, having learned how much I really wanted him, had chosen another cat. Harvey was mine and I was his. He was my birthday present to myself. Only a week or so later, his respiratory infection kicked in and I had to bring him to the vet where he spent 5 days on an IV and almost died, but he made it. He is a loving, sweet, smart and entertaining companion to me and his "sister", a calico I adopted as a stray years before. He really adopted me and must have seen a real sucker. He has me wrapped around his substantial paws and I would not have it any other way.