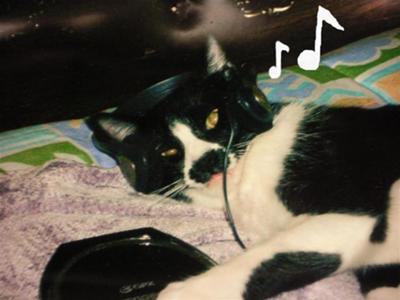 I took my 3 kids to pick out one kitten from a litter. When we got there, each child begged for their own. The lady said all would be going to the pound in the morning. Being the softy I am, we went home with 3 new babies. They were really too young to leave their mom and it was touch and go. But now, 8 years later we still have the 3 musketeers. Groucho moved out with my daughter when she got her own place. The other two still live with me. I posted stories about Merlin and Sophie my white cats. This is Groucho's story. You can see how he got his name. He has a mustache like Groucho Marx. The kids almost named him Hitler. He was way too sweet for that. Groucho is a big, happy cat. When you carry him around, he lays on your chest and hugs you like a baby around the neck. He was injured last year when he got out in the backyard without them knowing it. It was dark in the yard and when he jumped off of the fence, his dog brother and sisters thought he was a rodent and messed him up pretty badly. We didn't know if he would recover. They damaged him by stretching him. However, he is doing good, and after overcoming new fears, he still loves his dog brother and sisters. It has been several months now and he can jump up on furniture, counters and shoulders again.