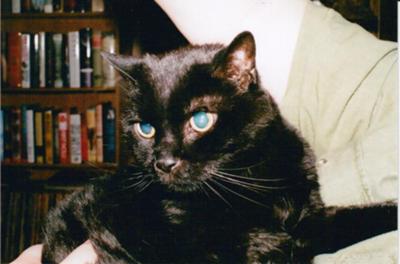 Get that thing out of my face!!!

This is an update on my friend Suzie's black cat Damian. As mentioned earlier Damian is now 18 years old and he feels he doesn't get the respect due a person of his distinguished status. Suzie insists on putting that camera right up in his face and when she takes a picture the flash hurts his eyes! It doesn't make for the happiest of boys, as you can imagine. And this picture just barely scratches the surface of his beautiful self.

He loves to talk and will talk to Suzie at the drop of a hat about any subject imaginable, but especially about what he wants to eat. He also likes to get a drink from the faucet on the bathtub. There is a neighborhood mockingbird that tries to give him a hard time but Damian just flips his tail and turns his back on it. Such foolishness! Suzie's husband Pat will sometimes cuddle with Damian and hold him in his arms like a human baby. Damian will tolerate that for a little while, but won't be content in that undignified pose for long.

By the way, every 5th of May, in observance of Cinco de Maio, Damien dons his red sombrero and has a margarita. Pat's family is Mexican/Irish so they celebreate Cinco de Maio and St. Patrick's Day in a big way. Damiam looks really good in that red sombrero. Suzie says he will NOT tell them where his pot of gold is stashed, however!