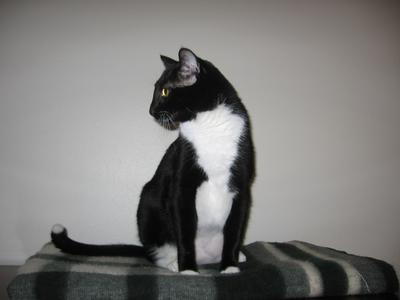 Butler came to us by way of our neighbor who had this little kitten screaming in her back yard. He was 7weeks old and starving. I took him home and fed him and tried to wash the fleas off him. I took him to the pound two days later because I had just had pneumonia and did not need a kitten. Three days later I went and got him. He has been a joy. I named him Butler because he looks like he has on his Tux, gloves and spats. His last name just evolved as a joke. Bad, Bad, Butler Brown baddest cat in the whole dam town....
He's Rotten!