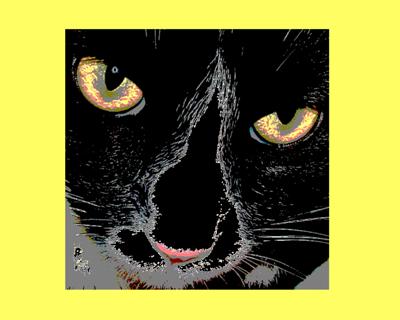 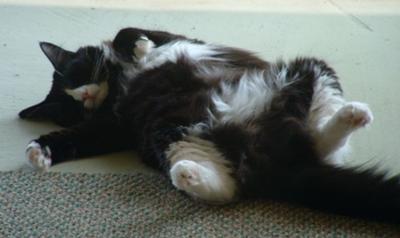 
We found Boots while paddling a creek in the Florida Panhandle. She was about three months old and had been abandoned in the forest on a rainy afternoon...sounds like the beginning of a romantic movie doesn't it? Her name describes her feet and lower legs which have short white hair and long white hair at the top of her boots. Little did we know that she would grow up to be a fashion model and centerfold for the magazine made famous by Huge Huffer. She was the playcat of the month in July of 2005. Later she had a few small acting parts in movies such as "Cat on a Hot Tin of Tuna" and "What's new Pussy Cat?" She is retired now and spends her time relaxing by the bird bath and being pampered by her staff of doorman, chef, and personal groomers. She's thinking of making a come back in show biz as a sultry jazz singer...she likes to practice her favorite songs in the wee hours of the morning. Even though she is middle aged she still has the legs to attract younger Toms. I've left out the more personal parts of her life but can assure you that in her day she was the cat's meow.
- written by a close personal friend