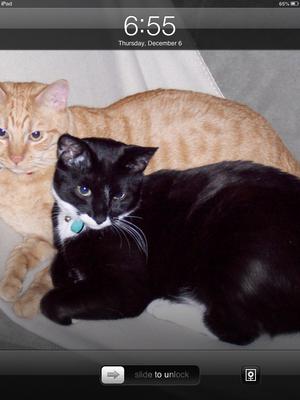 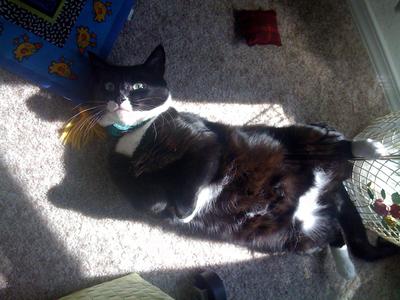 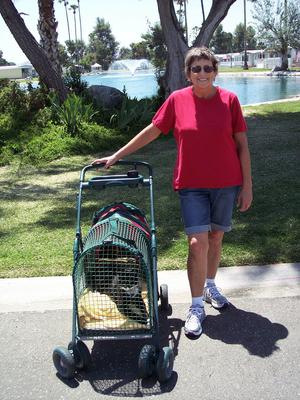 Boogie and me on our walk 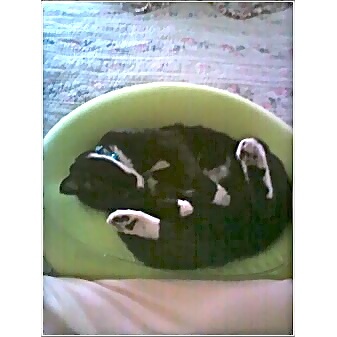 Boogie relaxing on his favorite pillow

My husband and I live in the desert of Southern California. In August of 2006 my husband was getting ready to leave and noticed a cat under his truck. The temperature was over 110 degrees that day so he knew the cat must be dehydrated. We also knew someone had abandoned the cat, since we have seen many instances of this cruelty since living here. As soon as the kitty saw my husband, he immediately came out from under his truck and began rubbing up against his legs, begging for affection. We tried giving him water, but he wouldn't drink. We knew he was in a bad way. We tried some tuna and he wouldn't eat it. Next we tried milk, and he inhaled it, as we breathed a sigh of relief. Then we tried the water again, and he finally drank, then the tuna, and he gobbled it up. Naturally we adopted him, and within a few days of coming home from the vet and being neutered and getting all his shots, we named him our little "Booger," very appropriately, which we later nicknamed "Boogie." Boogie loves to play, be around everybody, and gets into all kinds of mischief. When we began grooming him, which he loves, we noticed he has white splotches on his underside in exactly the same pattern as if he was wearing a bikini. He is always embarrased when we show people his bikini! Boogie loves to go for walks in his stroller, and is now the hit of our retirement community! We added a companion, "Tigger," who was Boogie's best friend for a few years, until we lost our ""Tigg-Tigg." Boogie misses him dearly. About a year afterwards Boogie developed a condition called "stomatitus" which is an immune system disorder characterized by a bacterial infection in his mouth in which we have to give him daily antibiotics, and regular oral hygiene, which he hates. Because of the stomatitus we can't adopt another cat as it is probably contagious. Also, stress causes the condition to worsen so we can't travel with him. We love our little Boogie" very much as he is the most affectionate and loving cat we've ever had and know he was a gift from Heaven.

Note from webmaster: Click on each thumbnail to enlarge picture.