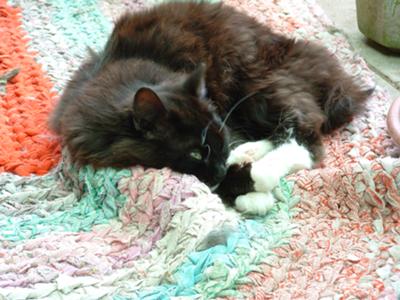 Laying on a rug, Barney style

Barney was just the coolest kitty and lived with us for 16 years. We actually chose her sister Sheba from some ferals that lived on our property. The sister ran when she had a chance and we captured Barney. Well Barney, captured our hearts. She never intruded but was there whenever I gardened. Pictures I have taken of her have won contests at work. She was such a sweet natured fur child who passed on from old age about 8 years ago now. Sheba was finally cornered and spayed in February 2011, this year, and was preggers again. Sheba has to be 24 years and is just the little ole sister who wouldnt stay in the house.