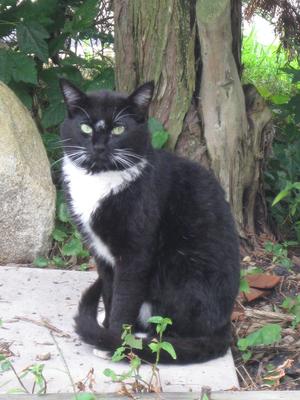 Here is another picture of Nightmare before he became an indoor cat. He was living with a tabby cat and her 2 kittens. He is probably the father as one kitten looks just like momma and the other one has Nightmares markings and temperament. Nightmare is a very friendly and talkative cat, in addition to being well dressed.

Note from the webmaster: Check Nightmare's first picture. Isn't he the cutest?